Why You Should Reply To 100% Of Candidates 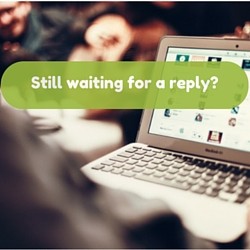 According to a CareerBuilder survey of more than 3900 workers, 75% said that they had applied for jobs and then not heard anything back.

Inconsiderate, unethical, unprofessional, disreputable, unprincipled - candidates react using different adjectives but the feeling is the same and no wonder - more than 8 out of ten candidates EXPECT to hear back from a company when they apply for a job regardless of whether the employer is interested in them or not.

I just think it's potentially costly to you in the future.

There are reasons why it happens, let's crunch some numbers.

According to an article in Wall Street Journal, about 80% of available jobs are said to never even get advertised - they're either allocated in-house or through trusted recruitment agencies and partners who recommend and supply talent, often without the need to advertise (by the way using such a service can make sense both for employers and candidates!)

Of the 1 in 5 vacancies that do make it to the job boards (if you accept the WSJ article’s claim), the average number of people who apply for any given position is 118 and just twenty-percent of those applicants get an interview.

The numbers will vary but you can see how small a part of the overall recruitment process an individual application actually is, but come on that's no excuse for not responding.

In fact, things don't get much better for candidates progressing to the interview stage. Having gone to the time and effort of attending a face to face meeting, 6 out of 10 applicants say that THEY never heard from the employer again.

Applicants have to shoulder some responsibility, internet job seekers have adopted a 'more scope more hope' approach to their searches, sending applications for positions to which they are not suited in the hope that someone may spot their potential and take a chance on them. Of course the reality is that increasingly firms are using applicant tracking systems to weed out unsuitable candidates and ATS systems can't spot hidden potential.

By the way, a word of caution when using such systems. One large firm disguised the CVs of their top five engineers and fed them through their own ATS screening process - it rejected two of the five. With that in mind it's easy to imagine how much suitable talent is getting screened out by inefficient ATS processes and if they're then not even hearing anything from you by way of feedback you can probably also imagine the damage that could be being done to your reputation within your target employee market.

In fact, a survey from StartWire spells it out;

More than three quarters (77%) think less of companies that don’t respond to job applications and 58% may actually even be put off buying your products or services if they don’t ever hear from you. These applicants WILL go on to find work in your industry, perhaps even with a company that outsources to service providers like yours. How quickly do you think they'll respond to your sales approach if you couldn't be bothered to respond to theirs?

Of course, candidates should cut companies some slack. HR departments have fewer staff after the economic downturn and they are processing more candidates. Furthermore, recruitment can be a long process – companies often set a target to recruit after a process with a set timescale. Let’s say it’s eight weeks, how soon should an applicant expect a response if they applied on the first day it was advertised? Realistically, they should not expect to hear anything for at least two months but their paradigm is different from yours. Recruitment is fairly low on the list of key priorities for many busy employers – who are in business to service their clients. The business of actually doing business often bumps recruitment down the list - but again neither of these are really valid reasons for a total lack of response.

In this day and age it's probably as easy to respond to every applicant as it is not to – and it's worth it to avoid damaging your brand and reputation.

Candidates never seem to take to social media to praise fair treatment received after they apply for a job but if you treat them badly or ignore them altogether their Twitter followers soon hear about it. Chances are that your sector has shrunk in recent years and the internet and social media have made it easier for professionals to connect. Like a village, bad news travels fast in these communities. If you fail to respond to Doug's application this time, Helena may be put off applying for your next opening for which she would be perfect.

If you interviewed the perfect talent and they chose your competitor you'd do some serious navel gazing, so how is putting them off applying in the first place any different? It isn't.

Companies that get a reputation for application feedback vacuums and communication black holes DO miss out on potential star performers - 96% of job seekers say they are more likely to apply for a job if they know they will regularly get status and progress updates on their application. 96%! That's why you should reply to 100%!

Consider this when you advertise your next position - your behaviour today could influence your hiring power exponentially in the future. Reply to every applicant - or get a talent recruitment partner who will.