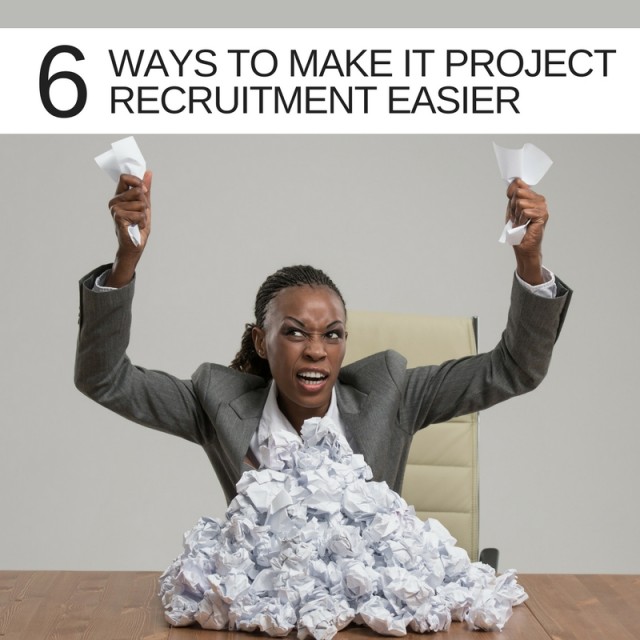 During recent conversations with CIOs and Project Teams about recruitment, I've noticed something of a trend.

Hiring the right IT project talent is hard.

Furthermore, the more complex or larger the project ... the more difficult it becomes. To put some numbers on that, maybe a third of teams handing small projects said recruiting talent was a struggle rising to around nine out of ten for the bigger projects.

This anecdotal evidence has been backed by various polls and surveys over the years and I decided that, as well as listening to the pain points, I would drill down a little and see if there are any trends behind the trend. Having identified some common reasons, I figured, surely some solutions would present themselves.

When recruiting for the lead in King Lear, there's a reason why The Royal Shakespeare Company doesn't call the highly successful agent Thomas Kroth, despite the amazing wealth of talent on his books. The reason is that Kroth is a football agent. Now, while having goalie Manuel Neuer deliver "How sharper than a serpent's tooth" might be quite entertaining, it probably wouldn't the right fit.

And so it is with IT Talent. OK, I'm being a little flippant with my King Lear reference but (to quote it again) “Many a true word hath been spoken in jest.”

The thing is that, when you want the best IT Project talent, it helps if your recruitment partner already has an active database of them and is in regular communication. The best specialist talent is inevitably accessed via the best specialist recruiters.

Truth is, they didn't need a PM they needed a Business Analyst (BA). They'd gone to a general recruiter and said, "We need a Project Manager" and to be fair the recruitment firm had found them a number of PMs but none had been right.

Your recruitment partner should be sufficiently experienced and have enough integrity to tell you what they believe you actually need based on a deep understanding of your project requirements.

During those conversations with CIOs, I identified several projects who were searching for a PM when what they needed was a cheaper co-ordinator or a more experienced Project Leader. In the latter case, although a leader came at a higher cost, the money saved not making bad hires more than paid the extra salary!

3 - Recruit From A Project Manager's Perspective

The process of hiring a Project Manager is different to recruiting most other roles. ALWAYS think about your audience. Much of the regular HR recruitment checklist goes out of the window when you prepare an ad for a PM. To illustrate this I asked a number of recently hired PMs about opportunities they'd passed over and what had put them off ... by far the greatest reason for not applying can be categorised as 'corporate gobbledygook'.

Write meaningful role profiles written by subject matter experts and be brutally honest about the challenge - if the project isn't for the faint-hearted and will be hard work be upfront about it (most Project Managers love a challenge).

If you struggle to get into the mindset, take a shortcut, get a recruitment partner with project management experience.

Following on from the last point. How many job ads do you see that are copy/pasted either from a previous hire or, even worse, from the internet?

You need project talent aligned with where your business and project portfolio is at right now. Not where you were the last time you hired or where some other business is - where you are. This is the best way to ensure a smooth onboarding process and hire someone who will develop and grow their skills as your business grows.

Classic example, a well known financial services firm who copy/pasted an ad from a previous recruitment drive and got a shed load of interest from candidates who were exactly like the brilliant departing Project Manager was when they hired him. Perfect, right?

Problem was ... that seven years ago.

The business had moved much more online in that time, their customer base was increasingly accessing their services through an app, IT Projects had evolved from small, back office support to large and business strategy aligned. The departing PM had evolved too over those years so what they needed was someone with the competencies he had now ... not seven years back which is what their ad attracted!

If you haven't got a handle on "where you're at" as far as your IT Project Maturity is concerned an IT advisory service or specialist IT Recruiter can help just make sure that the partner you choose has a track record of getting to know you, your business, your portfolio and your culture (ask them!!).

Controversial, but I'd say most bad hires are down to inadequate interviewing skills. Now, this is not a criticism, the majority of HR professionals are great at asking questions that identify a candidate's suitability for most vacancies. The problem is that IT Project roles are unlike most vacancies. As a hiring manager once put it, "Ask the wrong questions recruit the wrong guy" and nowhere is this truer than in IT Projects.

It's no-one's fault. Most firms have a two-stage process.

First candidates are interviewed by the HR team who have no experience in IT Projects and secondly they meet the hiring manager who often has little experience of interviewing. Put like this you can see why some firms fail to identify the best candidates altogether or make bad hires. Several project managers have told me they have turned down offers or rejected a second interview because of a negative interview experience. Not good for your employer brand!

Ideally, interviewing and profiling should be conducted by experts and professionals experienced in working in the IT project management sector and from a paradigm that is empathetic to your needs. If you don't have this luxury chose a specialist IT recruiter.

Call a spade a spade.

One of my friends often tells the story of his favourite recruitment success. A talented project manager who had a transformative impact on the business he joined - his "dream employer" and a huge player in the sector that most interested him.

It was a great gig but it was one that the firm had really struggled to fill.

When my friend first shared the opportunity, the candidate's reaction was that he'd seen the ad several times, he'd love to work for that employer but was disappointed when he read the job ad and it wasn't for him. Rewind to what I said earlier ... "dream employer", "great gig", "transformative impact" ... how much more right for a job can you be!

Lastly, make your ad as widely attractive as possible - think "whole of the market". Avoid any in-house or sector jargon - remember your next Project Management hero might be working right now in a wholly different industry - it's their transferable skills, knowledge and talents that will be transformative and most effective for you, not how well they know the meaning of acronyms that you and your colleagues use.

To conclude, for those of us in the business of matching IT Projects with the right talent, it's good that so many find recruiting so hard. However, taking a broader view, wouldn't it be great for IT Projects in general if it were not the case. Applying these ideas should make things easier but when you do hit a recruitment brick wall ... you know where to come.