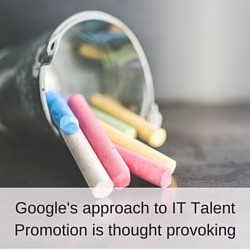 Google's senior vice-president of people Laszlo Bock wrote a LinkedIn post that really got noticed in the social media world of IT recruitment.

Bock shared his five steps for getting a promotion. It's aimed at employees but I've been considering what impact it could have on employers.

Whilst acknowledging that "no algorithm or checklist for advancing your career" exists, it is an interesting read for promotion seekers and ambitious talent but what could it mean for employers?

Firstly, the five pillars of Laszlo Bock's advice are:-

1 - Get feedback all the time.

Summary: Talent is encouraged to ask the person who awards promotions, what it takes to get one! Then do exactly that.

Summary: Talent should work out what their bosses' greatest problems are and then solve them. Bock tells the story of how his influence increased and his more esoteric ideas were given more attention after he set about first solving the most pressing problems faced by Google CEO Eric Schmidt.

Summary: Being more marketable, not just for this promotion but for other opportunities. "None of us know what jobs we'll have in 5, 10 or 20 years," writes Bock. So talent needs to learn skills that will make them more marketable not just this promotion, but any future jobs too. Talent should use their time at your organisation, in their current job, as "training for the next one".

Summary: Google asks its people to nominate themselves for promotion and noticed that women were slower at doing so than men but when they did they had a greater success rate. "Be sure to raise your hand," says Bock.

Summary: If there isn't room in your organisation for promotion or your talent is repeatedly overlooked – they should "Move on".

All of the above is interesting for the individual looking to progress up the career ladder with your organisation but as an employer, what impact could Laszlo Bock's advice have on your team?

Well, if they take his wisdom on board, I think it could be quite profound.

Of course, it would be wonderful to have a team of feedback junkies who are working daily on your most pressing concerns and those of your organisation and it is great to have a team made up of ambitious, upwardly looking talent, eager to learn extra skills ... but ...

What if they outgrow your offer? What if the only room in your organisation for promotion is your job - and you're not moving? What if having ‘upskilled’ to impress you they also impress your biggest competitor and get headhunted away? I think that Laszlo Bock's advice to employees raises lots of "What ifs" for employers, especially point number five.

"If the only way to get promoted is to take your boss’s job, and she’s not going anywhere, you need to move on. If you’re consistently being sabotaged and you can’t fix it or fight it, move on. And if you’re told no three times, even if you know in your heart you deserve a promotion, cut your losses and move on," writes Bock.

The way that IT talent views itself has shifted and will continue to do so. As it evolves, your team is probably going to be more and more fluid. It will move away from the same faces looking at the same screens, day after day, to a less permanent set up where teams of talent come together to solve a problem or work on a project and then dissolve.

For talent, writes Bock, "Part of success is picking which game you’re playing. In the tech industry we call this pivoting: if your current plan or company isn’t winning, pivot to a new one where you can win. Choose to be somewhere where you’ll be valued."

Is your organisation ready to access talent and similarly pivot in this way?

If your talent decides that their career path is limited within your business and they move on could that leave you with a capability gap that will affect your service offer? Can you afford a dip in productivity while you recruit?

The benefits of assessing this now and acting upon your conclusions are many fold. By working with a recruitment partner that pools interviewed candidates and maintains ongoing contact with them you can benefit from fast response times in the event of one of these "what ifs". You can mitigate potential capability gaps.

When Google's senior vice-president of people wrote his blog it was aimed at talent.

I think that it throws up some great opportunities to review things from the other side of the recruitment desk too. The requesting and giving of feedback is always a win/win and having all your problems solved by keen, super skilled staff can never be a bad thing.

Most important of all, though, future proofing your business against ambitious key staff moving on could be the greatest unintended gift to you from Laszlo Bock.