Could offbeat questions be beating off potential talent? 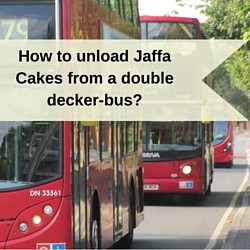 “If you woke up and had 2,000 unread emails and could only answer 300 of them how would you choose which ones to answer?”

As a candidate how cold does your blood run when you're asked a question like that in an interview?

The above question reportedly comes from Dropbox and it may come as no surprise that when Glassdoor.com ranked the 25 oddest brain-teaser type questions last year, 16 of them came from the tech companies - that's 64%!

So do they work? Do they predict anything?

I don't think they do.

Of course, for many years, Google was one of the tech companies you would most commonly associate with such quirky interview questions (you will have seen the film, "The Internship"!) However, it seems that even Google have abandoned them. Laszlo Bock, Senior Vice President for People Operations at Google told the New York Times, "We found that brainteasers are a complete waste of time. How many golf balls can you fit into an airplane? How many gas stations in Manhattan? A complete waste of time. They don’t predict anything. They serve primarily to make the interviewer feel smart."

Jenna Wandres, a Google spokeswoman told ABC, "We have shifted away from these types of questions because candidates hate them, answers leak easily and, most importantly, research on the connection between being able to correctly 'solve' a brainteaser and future job performance and/or IQ is questionable and inconsistent."

Indeed, so why are so many recruiters still using them?

One IT Project Manager I know, with many years’ experience, was asked how he'd unload a double-decker-bus loaded with Jaffa Cakes. He said he wouldn't and that furthermore he wouldn't want to work for a company so lacking in strategic direction that it wasted time loading public transport with confectionary. He walked out but would have been perfect for the gig. He now works elsewhere for a company that asked him to boast about his achievements and talk about how his experiences to date would benefit the role for which he was applying.

Indeed, this line of behavioural questioning is now apparently favoured by Google. Questions that begin 'Give me an example of when...' offer much more contextual evidence of capability and provide an insight into how your prospective candidate has operated in situations similar to those that will actually occur during their employment with you.

Again speaking to The New York Times, Google's Laszlo Bock said, "When you ask somebody to speak to their own experience, and you drill into that, you get two kinds of information. One is you get to see how they actually interacted in a real-world situation, and the valuable “meta” information you get about the candidate is a sense of what they consider to be difficult."

It isn't just the headline-grabbing quirky questions that are turning candidates away. Often really intelligent technical questions that are just not suited to the position or the level of experience of the candidate can be just as annoying. In his LinkedIn blog "Rejections of Smart People: Insane Hiring Practices", Varun Batra talks of an experienced candidate who was asked to write algorithms on a whiteboard - fine for an applicant fresh out of University but highly patronising to someone with more than a few years under their belt.

The real danger for organisations is that you could actually be turning away future candidates from applying (not just turning off the one sat in front of you). Word spreads. Just look at the feedback Glassdoor.com gets about these types of questions or watch "The Internship" or read a copy of William Poundstone's book, "Are you Smart Enough to Work at Google?"

Act in a disrespectful or churlish manner in regard to hiring talent and they will tell their peers about it.

To be honest, the only way that you're going to attract and recruit intelligent, task-focussed, experienced talent to your organisation is by acting that way yourself and unless you're in the business of extracting Jaffa Cakes from Routemasters, avoid questionable questions.

Treat candidates with respect and they will respect your vacancy.

NYTimes.com : I head hunting big data may not be such a big deal

Glassdoor.com: If you woke up and had 2000 unread emails and could only answer 300of them how would you choose which ones to answer?

Tags:
Client Blogs Blog- Recruitment Strategy Blog - Interview Tips
CIOs - Taking an aaS approach to IT talent attract...
Why You Should Reply To 100% Of Candidates